Welcome to the WesternJustice blog!

A young British student, this blog is simply my forum for presenting my latest thoughts and ponderings on major world issues of our time. Please comment on any articles that you have a viewpoint on and add to the WesternJustice debate!

Go Check Out My New Blog!

In time for the London Mayoral Elections, I've set up a  trial blog: http://politicslondon.wordpress.com/
Please get viewing and feel free to comment!
Posted by Tom Red at 13:54 No comments:

"The Iron Lady" - A Frankly Disappointing and Unworthy Portrait

Ok I'll keep it relatively brief, after all I am by my own admission, no film buff...
Yesterday I had the privellage of attending a film at the local cinema, and my film of choice? The Iron Lady. Much hyped up on both sides of the Atlantic I'm sure, the film was graced with the presence of the multi award winning Meryl Streep. Indeed, although relatively less famous, the film was also fortunate enough to have another proven actor in the form of Jim Broadbent (whom I must say did seem to largely suceed in impressively depicting Thatcher's long suffering other half, Dennis).
Now, I must point out that I personally have a deep rooted disfavour for the former Prime Minister upon whom the film was centred, and so it is in some form to the film's credit that it suceeded in altering some of my opinions of her. For example now I feel rather sad that she is a miserable old lady who is clearly insane and haunted by the sins and mistakes of her poltical career...
Well actually I'm lying, just like this film is. Through the films' patronising depiction of the UK's first female Prime Minister, I instead feel pity for her, genuinely, in that before she has even passed away Hollywood is ready to swoop and trivialise both her past and present. An incohernet storytelling of her life through a number of frankly unrealistic flashbacks or psychotic episodes, is simply not adequate to tell the tale of any world leader past or presnt, especially if they have been so controversial.
So, in summary I found the whole method of storytelling (ie through flashbacks) rather naff. Secondly, despite Meryl Streep's most admirable efforts, perhaps through prejudice, I remain whole heartedly against the idea of an American playing the role of a figure so quintessentially British (imagine a Brit playing Kennedy?!). Thirdly I found the underlying issue of the timing of the films' production (whilst she is still alive) as wholly inappropriate, whilst it's often patronisning and most probably false portrayal of Margaret Thatcher is simply poor.

You simply cannot biopic the life of someone such as Thatcher and make it into a Hollywood blockbuster. In three words:
Sentimental, Inaccurate, Americanised. 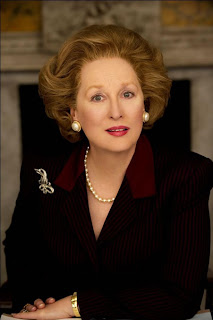 A fine performance by Meryl Streep, but a flawed film nonetheless.
Posted by Tom Red at 12:53 2 comments:

The Arab Spring 12 Months On (Part One)

Following a lenghtly lull in Western Justice activity (sorry!), I publish the first of two parts of an article that I have been writing, which reviews the Arab Spring. Please comment with feedback or your own opinion! Part two to be published next week...
Revolution by its’ very definition, alters the power system drastically within a short amount of time, removing the old leaders with a new, and often thoroughly chaotic, sphere of politicians and the like. Leaders who were seen as tyrannical are replaced, inevitably, with the tyrants of tomorrow.  Great fanfare erupts from the smouldering shells of the fallen, destroyed empire and premiership of the past. Glorious chants and flag waving are borne out of death, destruction and despair.
Naïvely, the population dares to hope for a brighter future, blind to the rapid and brutal clambering of the fallen leading classes or even perhaps the clambering of the paupers of yesteryear, who jostle and wrestle to enter the sphere of influence they so cherish, and who, privately was at the core of their motivation for rebelling in the first place. Egypt is a case in point. Amidst national dissent in the wake of the masses realisation that they had been mistreated for so many years under Mubarak’s regime, and could in fact now barter for a better deal, pandemonium succeeded to force regime change. The ‘drug’ of change was truly infectious, a truly inoperable cancer for the military tacticians and other tyrants to try to tackle. They truly did not stand a chance!
Fresh from the comparatively less publicised and less critical events (form the Wests’ perspective), in Tunisia, the Egyptian people felt empowered. Revolution, as well publicised, is infamous for being wholly impossible to halt, or even to some sort of meaningful degree, contain. Like wildfire, the adrenalin induced by the initiative of violently and physically bringing about ‘a new dawn’, a ‘better deal’, and various other promises of freedoms, led the peoples of successive Arab states to rebel, to take to the streets to fight the regime.
The once oppressive powers were truly at the mercy of the protesters. They now had three options:
1)      They could carry on their oppression of their own civilians, fighting the protesters militarily, head on.
2)      They could make compromises with the growing masses threatening their premiership and influence, which they had carefully constructed across years of selfish, ultralist tyranny.
3)      They could seek refuge abroad, stripping the country of its assets, getting away while the going was, relatively speaking, good. 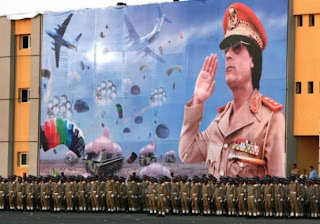 As the arsenal of the west is unleashed against the disillusioned dictator that is "Colonel Gadaffi", one cannot help but wonder whether our supposedly good military intervention is in fact a lethal mistake. Bombing raids and other clear acts of military aggression by the usual, busy body culprits of the USA and the UK are clearly not satisfactory.
Where was the diplomacy? Why are they so quick to effectively wage war against the oppressive regime of Libya, and not Bahrain, Iran, or Yemen? Why did US forces maim an innocent civilian youth who had come to assist the downed pilot of a crashed military jet?
The response to the Libyan crisis was sluggish, to say the least, but now it appears ridiculous and most clearly heavy handed. I am no defendant of the tyrant that is the current Libyan leader, but neither am I supportive of bombing raids under the veil of "the establishment of a no fly zone".
However, two things are certain through all of this violent debacle;
1.Civil war is brewing in Libya

Following weeks of anti-government protest on the streets of Egypt, long reigning President Mubarak has finally bowed to the pressure of a justice hungry population. In recent months, political instability has rocked the region as oppressed and often hungry populations sought to depose the corrupt regimes that had tormented and mistreated them for so long.

As we have seen in Tunisia, Egypt, Yemen and more recently Algeria, the people of the planet are now standing up and actively campaigning for the fundamental rights of man. We have also regrettably seen the almost inevitable hand of violence from the threatened regime. As westerners, it is important that we stand in solidarity with our justice hunting brothers and sisters living in lands where oppression is rife and hunger is real.

In the wake of the handover of power to the Egyptian military, it is our duty to ensure peaceful stability and political freedoms by actively monitoring the situation. We must not seek to be advantageous in the light of 'revolution', but instead offer our support to the peaceful transition of democratic values for the country. A long and potentially hostile path lies between now and a free and fully democratic Egypt, but the wheels of prosperous change are well and truly in motion!
Posted by Tom Red at 03:12 No comments:

Politically Motivated Predators Close In on Vulnerable People Of Haiti

One year on from the terrifying earthquake that saw Haiti reduced to rubble, the predators are finally coming to circle the confused and apparently abandoned people of this impoverished nation. Seeking to satisfy their own political agenda, these former 'leaders' wait to cause maximum damage to the already crippled and indeed confused democratic scene. Amidst political uncertainty, people live on day by day trying to survive.
﻿ ﻿
The last thing that the long suffering Haitians need is a former dictator landing at the airport with the arrogance of a cocky school boy, whilst much of the population live in squalid temporary camps. This sort of extravagant and self-centered economic and politically motivated nonsense seeks only to distract from the underlying issue, HAITIANS REMAIN ABANDONED AS THE INTERNATIONAL COMMUNITY TURNS ITS BACK ON THE PEOPLE IT VOWED TO HELP! Where are the signs of progress, one year on?
12 months on people are still missing and disease is rife. Throw in a troublesome former dictator and the 'impending' arrival of a former president ( Jean-Bertrand Aristide) and you get a stark image of what the near future may potentially hold. It is the job of the international community to ensure that the aid it promised to Haiti is delivered, and it is also the job of this community to prevent any derailing of attempts to ensure a swift and peaceful installation of a democratic authority for the nation.
Just because it isn't on the news anymore, doesn't mean that the problem has gone away. A cholera crisis has only added to the woes of the nation where bodies are still being pulled from the rubble.
DO YOUR BIT! KEEP HAITI IN THE PUBLIC EYE, UNTIL OUR GOVERNMENTS ENSURE JUSTICE FOR THE (STILL) SUFFERING PEOPLE OF HAITI!

Email ThisBlogThis!Share to TwitterShare to FacebookShare to Pinterest
Labels: Progress?

I Hope You Choke On That Turkey :/

Whilst much of the 'western world' sit down to their Christmas Turkeys and celebrate with sheer gluttony, young children starve and mothers die. Amidst all the celebrations of the Christian Festival and celebration the silent population of our world suffer. Climate change directly attributed to the world superpowers starves the people of Niger, forgotten amidst the pomp and ceremony of this festive time of year.

The Christian Bible tells of Jesus' Birth. This same staple of Christianity, tells of "loving thy neighbour" (ie making sure they don't starve and be forced to live like subhumans). The tragedy of Christmas is that the true message of the Bible is manipulated for self gain and greed. The latter, by many, is ignored and thrown by the wayside.

I, by my own admission am no selfless Saint. I aim not to insult or laud over anyone that I am in anyway superior , I'M NOT. I merely write this asking for your help in being proactive in your duty as a citizen of the WORLD.

FOR, REGARDLESS OF FAITH, ETHNICITY, POLITICAL MOTIVE, OR WHATEVER, IT'S ALL OUR DUTY TO MAKE A DIFFERENCE AND PROTECT FELLOW MAN.

To leave you with one concluding thought.

"How much did you spend on your Christmas turkey in comparison to how much you gave toward victims of modern day famine?" 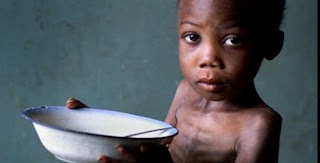 MAKE A DIFFERNENCE THIS CHRISTMAS!
Posted by Tom Red at 13:39 2 comments:

Do Believe That The UN Has Done Enough To Achieve It's Millennium Develpment Goals?